On September 19th, my Mom, older brother and I walked the Army Run. Mom doesn't run and I've been really trying to limit my races to avoid injury, so walking sounded like fun.

Sunday morning dawned sunny, yet crisp. There was little wind, but it was pretty chilly in the shade. My family met us at our place, only blocks from the start line. The three of us walked over and lined up with the walkers. My Mom had never participated in an event of this size, so it was really neat watching her take in the whole experience. She was so excited about the free t-shirt, the timing chip and the pace bunnies, of all things. 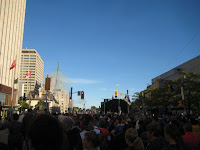 The soldiers fired the gun—which was as loud as a cannon—to start the race. We all jumped out of our skin and started moving forward. It took us about 10 minutes to get to the start line and then we were off!

The route was a little different this year, owing to the fact that the Terry Fox Run was the same day and used part of the previous year's route. The walk took us through downtown Ottawa, past some major landmarks like the Parliament Buildings, the Rideau Canal and some beautiful scenery. 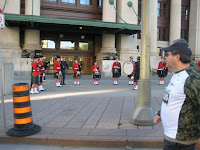 All along the route there were military bands, like this one: the Blackwatch pipe band and the RMC Cadets band. There was also another band at the start, but I wasn't able to see which one it was.

The walk itself took us about 55 minutes. It was a great morning for a walk and it warmed up nicely. We chatted all along the way. And I think my Mom may have been bitten by the running or walking bug... she was asking me all about the Couch to 5K program. I really enjoyed just spending the time with my Mom and my brother. And we were certainly thinking about our little brother, Matt, who's got less than three months left in Kabul. We're all really excited for him to come home! 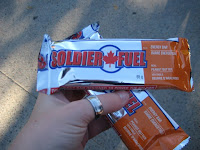 Next thing we knew, we were done, had our dog tag medals and a snack. Here's some of the post-race fuel they were giving out! Pretty neat stuff eh? Though it's mostly sugar and carbs... not much in the way of nutrition. I haven't tried it yet and I'm saving it for after a grueling run when I'm craving a treat.

And finally, here's the post "race" photo of us in Confederation Park. After this we walked down to a restaurant where my husband and Dad were holding a table for us. I treated myself to some very tasty french toast for brunch. 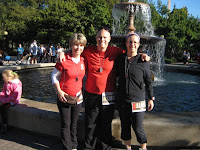 I'd definitely do the Army Run again... it's got a great atmosphere, it's not as insanely crowded as our Race Weekend events in May, and it's super well-organized. I love the route, too. I highly recommend it!
Posted by Alexa K at 8:53 AM No comments:

Today I ran my longest run of the year: 12K.
It was glorious.
I felt like a runner again as I ran along our picturesque Rideau Canal at 7 a.m. - the only other people I saw were other runners. I exchange hellos and good mornings with almost everyone I passed. It really was wonderful.
I also saw the editor of iRun Magazine, Mark Sutcliffe, as he ran his our personal marathon to celebrate turning 42.2 years old. He was running a 5:00/km pace as he ran the 12K out and back. He and his posse passed me several times... I wish I could've run with them, but that's a little fast for me! haha.
I've been feeling much stronger, fitter and faster as of late. I also popped into see my trusty physiotherapist this week to make sure all was okay with my back... and it was. We spent some time working on it and my flexibility, but it was really encouraging to know that I can continue to up my mileage as long as I keep an eye on my flexibility.
My army run post is coming soon, I promise. I was hoping to steal a few minutes at work to post it, but that didn't happen this week.
Posted by Alexa K at 9:07 PM No comments:

I ran my 5K recovery run last night. I decided to run near the Museum of Civilization, a beautiful national museum on the Ottawa river. There's a great path leading to it... it hugs the water's edge and goes through a beautiful forest. There's also a ridiculous hill at the beginning of said path...

Anyhow, I saw all kinds of chipmunks and squirrels. Staff at the Museum have installed some sort of falconry sounds that are insanely loud at timed intervals, presumably to keep the seagulls and Canada geese away.

After passing by the main plaza of the Museum, I caught a glimpse of this guy:

A belted kingfisher! That's not my photo and he flew away before I could pull out my phone to snap a pic. But he's by far my rarest sight on a run so far... he landed on a railing by the water's edge, not 50 feet from where I was standing. So cool.
Posted by Alexa K at 12:44 PM No comments:

The Army Run is coming up in 10 days. I hadn't planned to run this race, since I have my 10K in a month and I wanted to focus on it instead. I figured that racing a 5K might be tough to fit into my training, given that I usually go all out and don't properly rest after.

Then my Mom emailed me yesterday, wanting to do the Army Run for my little brother. He's stationed in Kabul, Afghanistan, until December. The thing is: my Mom isn't a runner. At all.

So I suggested to her that we walk it together. This way I can still fit in my 10K training run on the Saturday and use the 5K walk as a recovery workout the following day. I'm really looking forward to it, since I wasn't able to run this race last year. Their race t-shirt is awesome (a long-sleeve technical tee) and the race medal is a dog tag! Awesome!

The proceeds from the race go to support the Canadian Forces Personnel Support programs (CFPSA), including Soldier On and the Military Families Fund.

My Weightloss Journey So Far

About a month ago I mentioned that my husband and I were rejoining Weight Watchers. I'm proud to report that I've lost 8.8 lbs. since July 28th. It's been a nice, steady loss of about 1.5 lbs. a week. I'm starting to see a difference in my curves and how I feel. I hope to see a payoff in my running, as well. I'd ideally like to get down another 11 lbs., to my goal weight of 145.

I've also tried to incorporate more fruits and veggies this time around. Husband and I are eating at home more and planning more healthy meals. I adapted a Jamie Oliver recipe this week - a black bean and beef stirfry... it was fantastic and I'll likely add it to our list of favourite recipes.

Another key goal of mine in all of this is post-run recovery. I'm trying to improve my post-run fueling since, well, it used to be non-existent. I really believe that a lack of post-run nutrients contributed to my injury earlier this year. I never used to consciously plan to replenish my energy stores after tough runs. Without those nutrients, muscles can't repair themselves!

Now I do the post-run smoothie routine, complete with a vegan protein supplement, yogurt, frozen fruit and kale. They're super yummy and taste great after a hills, tempo or interval workout. I eat about two a week and I've noticed a difference in how quickly I bounce back from the exertion of a tough workout.
Posted by Alexa K at 1:52 PM No comments: